The demise of the org chart. The rise of the network.

“Well he’s supposed to connect across the departments, he is the Chief Innovation Officer!” Mark said incredulously.

Mark* is our sponsor at one of the world’s biggest global distribution system operators and he could not believe what he was seeing in the data. We were feeding back the results of our Complete Network Analysis assessment. Mark’s reaction has become a common experience for us in the ONA team.

A rise in interdependencies between business functions and recent decades of technological progress have converged to change the way organisations operate. Connectivity is no longer defined by reporting lines – employees connect up, down and across departmental boundaries for functional, social and strategic reasons. This interconnectivity is not reflected in the traditional organisation structure and, if anything, is hindered by it.

The connections between people constitute networks which are critical for the operational and strategic performance of the organisation. Networks drive collaboration and information flow within an organisation and are a source of energy and support for employees. Networks also cultivate agility and trust within the system and help employees stretch their thinking. Networks capture, in real time, how an organisation operates, and that is often different from the formal organisational structure.

These networks of connections go undetected when looking through the framework of organisational structure. Complete Network Analysis allows us to map these networks and show how an organisation is operating in reality. 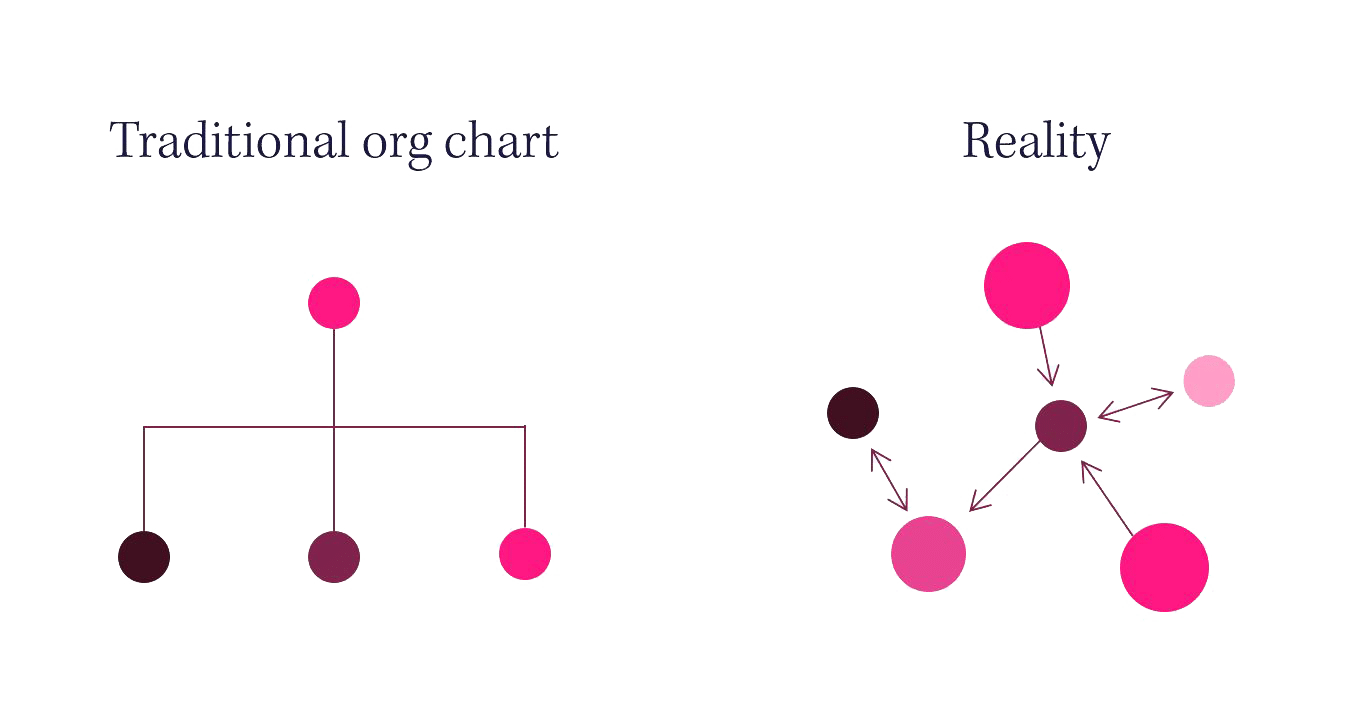 It’s not just at an organisational level that Complete Network Analysis can offer great insights, at departmental levels too, Complete Network Analysis reveals the real patterns of interaction between different divisions and departments. A formal organisation structure describes where connectivity should exist between the departments, but not where is really exists. We often find that departments either do not connect to each other at all or rely on just one individual (a bridge) for their connectivity.

Depending on the context, a single bridge may not be an issue, but there is always a risk of these bridges turning into bottlenecks as we found in the case of Mark’s organisation.  Mark was surprised to find that the Solutions and Customer Sales and Support teams relied on one individual in a key leadership position to connect with each other and there was almost no connectivity between the two departments at lower work levels. This is not sustainable as such excessive functional demand on one individual has the potential for negative consequences in terms of wellbeing and attrition.

Complete Network Analysis is not all about discovering low levels of connectivity between people and departments, in some organisations we also see strong levels of connectivity where we would not expect it, such as between Marketing and Research & Development. In the case of Mark’s organisation, the strong connectivity between Marketing and Research & Development was a reflection of their co-location but it can also be a result of other factors, such as leadership team initiatives to encourage closer co-operation. One key actionable insight from such cases of strong connectivity is to learn from the two teams and replicate their behaviour across the organisation.

*names have been changed to maintain confidentiality 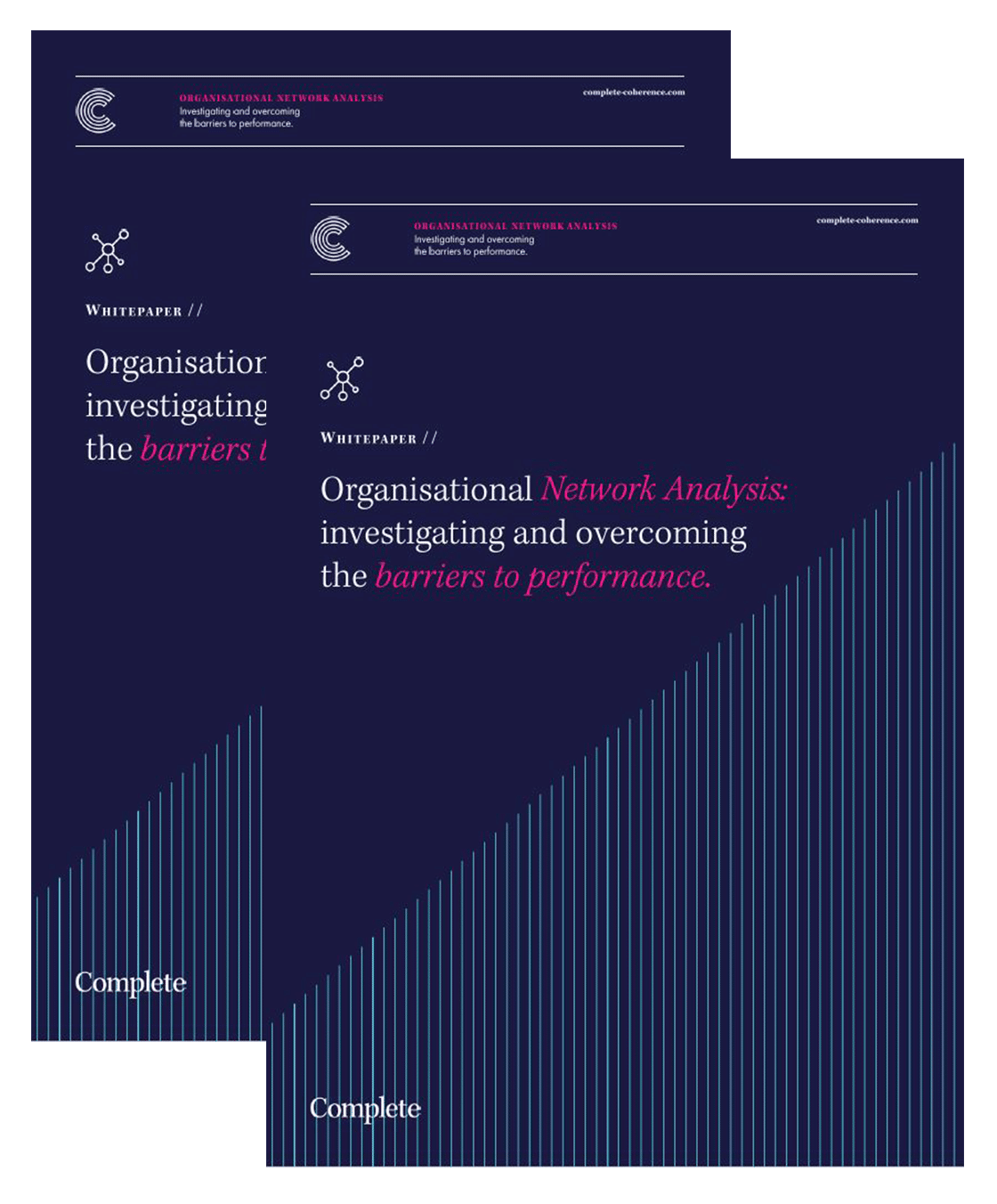 Complete Network Analysis white paper
A free whitepaper exploring how Network Analysis can help overcome barriers to performance.
Download
Danish Mishra
Danish is our Head of Analytics and holds a doctorate in Mechanical Engineering with Management from the University of Bath. He delivers organisational network analysis workshops with our senior practitioners with a focus on large multinational organisations with a global spread.
Read bio
The era of the empathetic boss
More than 30 years since Gordon Gekko declared “greed is good”, have we finally woken up to a more empathetic leadership style? Our LinkedIn family certainly thinks so. When we asked them in a re...
Read more
When differences are strengths – the value of assessments
Let’s be honest, it’s so much easier to work with people who think like we do. When you’re already aligned on the best option, you can quickly reach a decision. There’s not so much debate and...
Read more
Too busy to be stressed?
With so many competing demands on our time, we may miss the early signs of stress. Left unchecked, stress can have a serious impact on our minds and our bodies. On Stress Awareness Day, why not check...
Read more